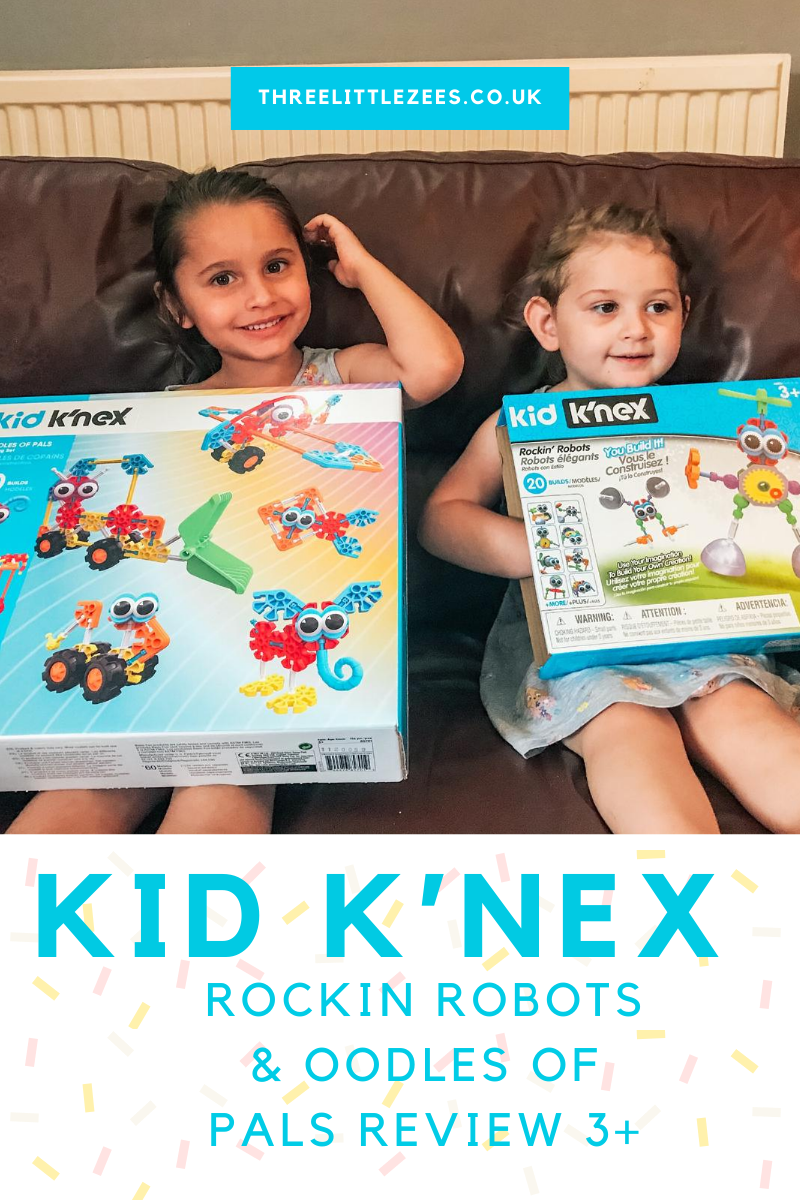 I hope you’re all enjoying the last couple of weeks of the summer holidays. One thing I find a bit difficult is trying to keep the kids entertained. My two get bored so quickly so we need something that they can keep on playing with for a while. That being said we were very kindly sent some Kid K’Nex for the girls.
*Disclaimer – These toys were sent to us for a review but all words and opinions are my own*

Now I remember playing with K’Nex as a child myself and remember how much fun it was. And guess what! It’s still so much fun even as a grown woman! If you’re not sure what K’Nex is, it’s an open ended building system consisting of K’Nex classic and micro scale rods and connectors which you and your children can use to create your own 3D Models with. It’s brilliant for developing STEM skills and which it having open ended creativity it allowed your little ones to explore their imaginations. Kid K’Nex is the first construction kit for younger children to get them started before they move onto Core K’Nex which is what I remember playing with as a child.

The Rockin Robots set has 50 Kid K’Nex parts and pieces with 20 ideas to create super cute little robots. We opened this box first and ha so much fun creating our own robots, some that were mentioned on the box and some the girls made using their imagination.

The Oodles of Pals set is much bigger than the other set we received and contains 115 pieces to play with. It has large and flexible parts which allow your little ones to create designs in various sizes and difficulties. There are 60 suggested model ideas and your children can also create their own too!

My little girls who are 5 and very nearly 3 have really enjoyed playing with both of these sets although admittedly they are all mixed up now so I’m not sure which pieces belong to which set. We’ve had these out every day since opening them and they love making their own buildings and characters with all of the pieces. The eyes and the wheels are a big favourite with these two as they can make faces with them and also make their creation move as the large set contains four wheels.

These are brilliant for keeping little ones entertained and are already becoming a firm favourite in our house. They are recommended for ages 3+ and are available from Argos, Smyths and also Amazon.

🥜 There is nothing peanut butter and a spoon ca

Erm... how is my littlest baby 3 at the end of thi

We’ve had such a lovely couple of weeks with my

And just like that the weekend is over! We did hav

AD *PR Sample* With Zara going back to school this

Hey guys 💖 I just wanted to thank you all for c